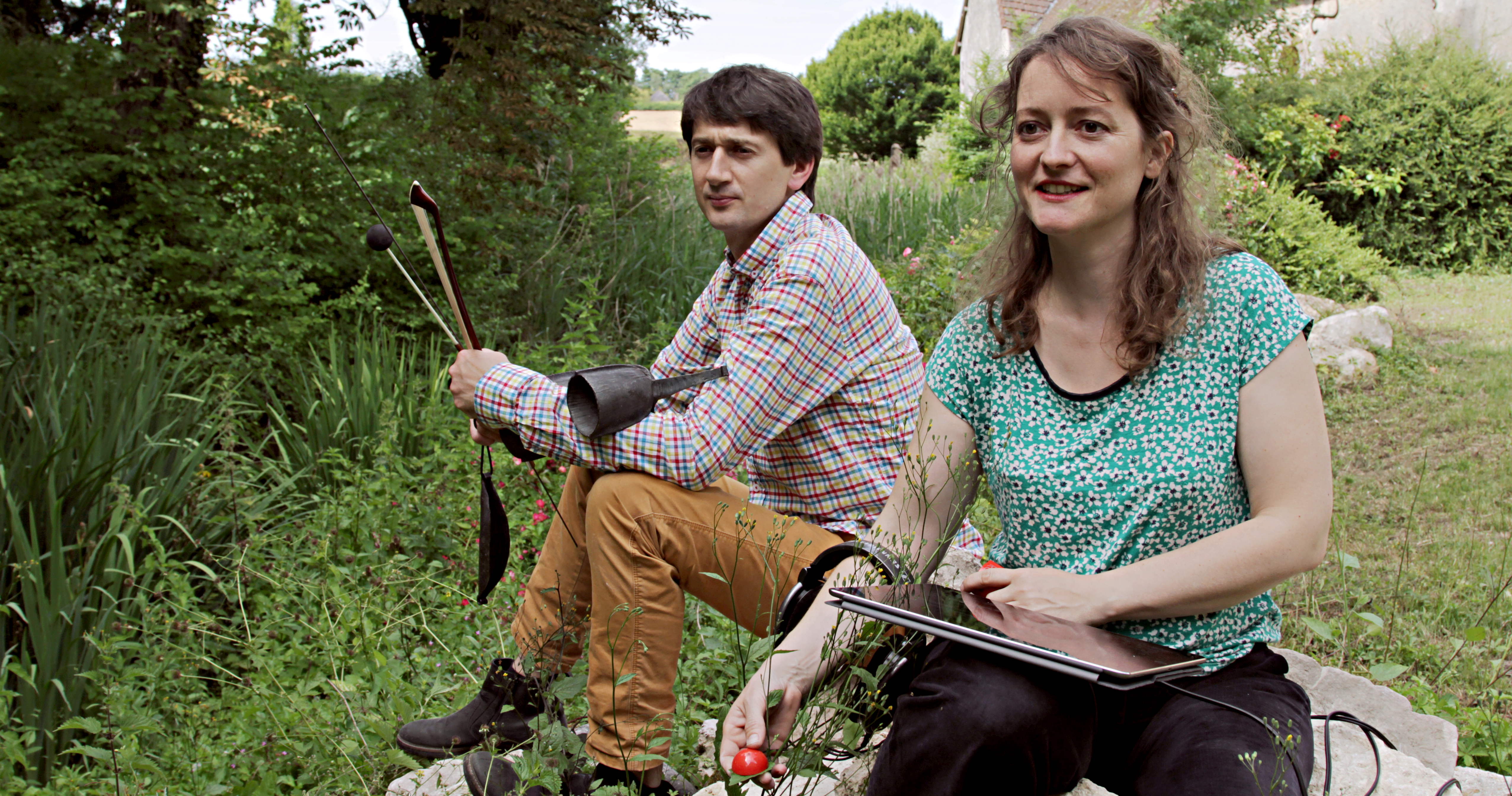 A dense and vibrating sound where rhythms and textures are intertwined and merging, a sound matter built around induced beat by sine waves that enter in resonance with the drum and create polyrhythms and complex harmonics. The drum is here exploited in his timbale component as mush as to have a rhythmic role.

“In music, rhythm is the metronome beats which is on the power side. But music also has another rhythm, the “ruthmos” which would be called swing in jazz music. By making many ellipses we could say that music is the paradoxical category of power, as long as it is defined by the ruthmos. It’s the rhythm as it is that admit a plus or a minus, an imperfection, a lack of something. Casals says, “Rhythm is being late” which define in fact the ruthmos.”

(Roland Barthes, “How to live together”)

Elsa Biston, contemporary music composer and Benjamin Sanz, drum jazz-player and improviser are creating a duo with the will of questioning the relations between rhythms, sound textures and material coming from the real world, more precisely in the zone where rhythm and texture blend together and become both the same. The bases of research and writing are done in duo, but the show will be done with one more musical, probably a clarinetist.

Elsa orient her instrumental and electroacoustic composition into a moving texture research. On a rhythmic lever she works with the flown continuous movement, the energy. She creates an instrument by using touch interfaces and a software that allows her to manipulate beats coming from an accumulation of “sine waves”. She creates different material that conduct at the same the time the complex polyrhythmic, texture and harmony stack that allows a continuous transition from both. These textures are spread trough vibrating speakers in Benjamin’s drum and other spreading supports, such as classical speakers, metal boxer used as speaker membrane and created saturation.

Benjamin works on the harmonic quality and timpani of its instruments which links into a common texture the rhythm that is being played. It has it roots in jazz music, African musique and music built around an origin-rhythm, crucial in the instant energy.

“It’s about finding a common space where both our musical worlds, our conception of sound and rhythm can meet each other. In order to do that, the prior for the musical work is the research of a original-texture, homogeneous, dense, vibrating, from which we all only define if it’s harmonious or rhythmic, under different things, non-individualized.

Then, in our music, we oscillate between two poles: the sound material, and the symbols carried by the sound material. It’s a questioning on the relation between implicit to explicit. We use the same sound material to create links between very different worlds, maintain them together, get them collide, use it on a freer way, recompose them with new relation always with the same common point: a vibration, a deep pulsation.”